Let’s get real here for a minute folks. As we’ve discussed before, the only way to safely dispatch an infected zombie is by removing/destroying the head and brain of the host. Now the best case scenario is that we do this from far away, with our long range weapons. But what if the horde overruns the outer defenses? What if the fight comes face to face, zombie versus humanity? In that instance, you may not have time to reload and fighting with a hand weapon may be your last chance at survival.

Now since we’re all about efficiency here, our ideal machete or hand weapon would be able to serve some other purpose to us during every day activities, if at all possible. So we’ll take a look at some of the most badass, versatile, useful and potentially life saving pieces of gear we can find.

This artfully designed utilitarian piece of equipment is as versatile as it is deadly. The 420HC Stainless steel blade is sharp and durable enough for daily use as a machete while still being effective for hand-to-hand combat if it comes to that. The furrowed blade will quickly direct any unwanted bodily fluids down the blade and away from the user. They also bore a hole through the end of the Viking Machete blade which results in a satisfying whistling sound as you wield it. If you need to clear the path and then clear out the zombies, the Viking Machete is the piece for you. 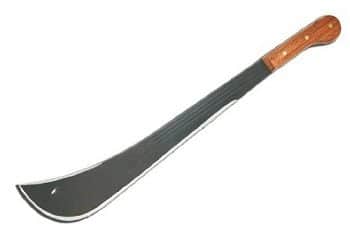 If you want to slice down vines and zombies while looking as badass as is possible, the Parang Machete is going to be your tool of choice. The Parang machete is a slick 26 inches of 1075 high carbon steel. This thing will cut through coconut husks or zombie brainpans with ease. The Parang comes with a convenient leather sheath for ease of transport, but you won’t want to use it when you see how cool this blade looks resting on your shoulder. Seriously, this may be a reason to desire the zombie apocalypse to happen, just so you can bust this bad mamma jamma out and start kicking ass and taking names. 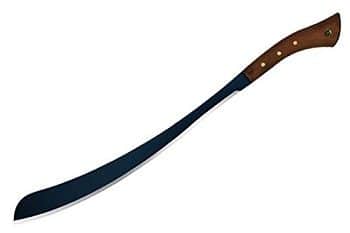 If you’d like something a little more tactical in your machete than the Viking or the Parang, I present to you the Schrade Kukri. This high speed, low drag piece of utilitarian survival gear is as practical as it is lethal. The black-powder coated 3Cr13 stainless steel blade makes quick work of any task and stays sharp and clean for the long haul. This is a full tang tactical machete, meaning that the blade is superbly balanced for effective slicing and dicing under any conditions. The holes drilled into the end of the blade not only make it aesthetically intimidating but also reduce overall weight and help with blade balancing. The Schrade Kukri is the junction of form and function that no zombie could withstand. 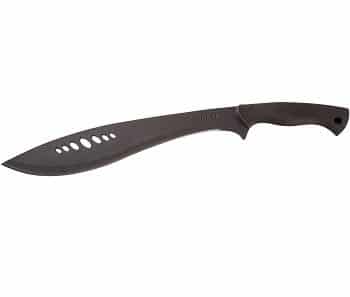 The E3-30SM is a really big hammer. I mean it is substantial. If Thor were a carpenter, this would be his framing hammer. If you’re planning on rebuilding civilization, you’re probably going to want a hammer around at some point. With that being said, sure a much smaller hammer would do just as well at nailing 2×4’s. However, when you see the gigantic milled face on the E3-30SM, you’ll realize its true calling was relieving zombies of their brains. Despite its substantial size, the 3-30SM is very light, easy to clean and ergonomically designed for all day comfortable use. It also has a built in shock absorption system which will have you happily crushing zombie skulls without getting the dreaded “zombie elbow” (like tennis elbow but from zombie smashing).